Lately I’ve been working with my old Yamaha TX816, TX802, and DX-7 synthesizers from the early 1980’s. I’ve been a long time fan of MidiDesigner for the ipad which is an app that allows you to create layouts or custom editors to help with creating patches for popular keyboards. I recently found one for the Yamaha DX-7 that works fantastic and I highly recommend it. You first need Midi Designer but along with it you’ll get a collection of other layouts so in the long run the initial investment in Midi Designer will quickly pay off.

Here is a great resource for Yamaha DX7 patches and information:
http://bobbyblues.recup.ch/yamaha_dx7/dx7.html

You can also find a nice second choice iPad editor for the Yamaha DX7, TX802, and TX816 using the TBMidiStuff App. It works great also!

For use with Lemur
Lets you edit the patches of a Yamaha DX7, TX7, TX816, TX216.
All voice and performance parameters are available.
https://liine.net/en/community/user-library/view/465/

I also use this editor for my Yamaha TX816
http://m.bareille.free.fr/synlibdxtx/synlibdxtx.htm

Or the SoundQuest Yamaha DX7 Editor and Librarian which is also great.

In addition, there is also another option for the computer:

This great VSTi can be used both as a DX7 librarian to edit patches and send them to your DX7 synth (if you own one) but also as an emulator as it’s built in engine recreates quite faithfully I think the sound of the DX7 synth. 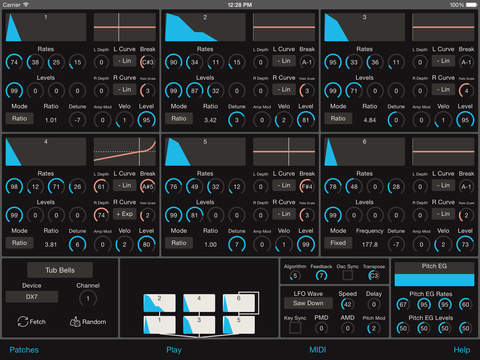 Patch Touch for the Yamaha DX7 is also now available.  You might want to wait until it goes on sale though as the price is steep for an iOS app, but it’s a good one so far.  See comments for video and some initial thoughts.  https://coffeeshopped.com/patch-touch-for-yamaha-dx-tx

Musicians wanted for jam sessions, band work, and song writing in the Nagano-city, Japan area. I can play synthesizers, keyboards, guitar, bass, and provide English vocals to your project or band. All levels of experience are encouraged to email. Nagano city Musicians are also wanted for help with the School of Rock Nagano city Japan project. Let's jam and enjoy sharing music on stage in Nagano-city, Japan. We jam on weekends and week nights!! Holidays too! Check it out!